Printed out the entire book today, for round two of editing. Thought I’d take a picture to show off the enormous amount of paper…

But someone decided she was more photogenic. 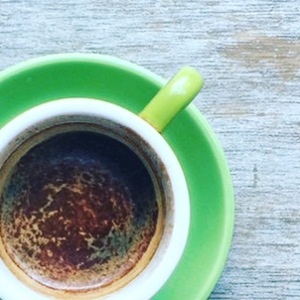 The barista always knows how my day is going, based on order. Today I got a “long black? Congratulations!”

And congratulations is right, if I do say so myself. No need for a mood-boosting mocha today, because I finished the first round of editing for the current book. And damn, but I love this story!

Now only five more edits to get through…

(Are you on Twitter or Instagram? I love hanging out with fellow readers and writers. http://twitter.com/AuthorLibby and http://www.instagram.com/authorlibby/)

The first round of editing is always a tough one. You find lots of silly mistakes, rushed conversations, cardboard characters… But that’s fine, that’s why we edit!

Except yesterday my muse ran away. One particular paragraph needed a major overhaul, and I was blank.

So I did what any good writer does, and set out to bribe her. I got a mocha, with marshmallows of course, and sat down in the sun to clear my head. Staring up at the blue sky through this tangle of branches, birds singing around me, my brain unfocused… I may have napped for a bit.

Today I sat down in front of the WIP, and the muse has returned. The troublesome paragraph was sorted in about five minutes flat!

So if all else fails, bribe the muse. Every time.

The uncrowned king of Barnett University. He’s like a freaking celebrity around here. It’s totally ridiculous. People, by which I mean grown women, actually stalk him on the internet. And around campus. Apparently he’s god’s gift to both football and the ladies (I’m using that term loosely). All he has to do is smile and girls just fall right onto their backs before spreading their legs nice and wide. I’ve heard that he’s already plowed his way through half the female population here at Barnett. I’m sure he’ll work his way through the second half before he gets drafted to the NFL later this year.

Yeah… I don’t plan to be one of them. The guy is nothing more than a conceited player. You know the type—a steroid infused meathead jock coasting through college on his football prowess.

This book has me torn. I really liked it in some ways, and not in others. So let’s start where any sadist would – with the bad things.

It was mostly little things that kept pulling me out of the story. Ivy was quiiite obsessed with being flat-chested, giving it a mention several times in the internal dialogue. But she’s a ballet dancer, so I would’ve thought that was to be expected! Come on girlfriend, more than a mouthful’s a waste anyway.

There are very detailed descriptions of what people are wearing in every scene, which I kept skimming. And phrases that kept popping up over and over, which I know can happen, but it started to grate just a bit.

I saw a few DNF reviews, which I get, because these issues are definitely worse for the first quarter of the book.

The characters hit their rhythm after a while, to be witty and fun. Once they finally got their ish together, it was a sweet, selfless love between them. Not just Ivy and Roan, but the supporting characters too. It was worth hanging in there to get to this stage, because finally those first issues melted into the background.

It was a fun read, and I definitely enjoyed myself, but there were just a few little niggles.

Have you read it? What did you think?

A few readers have asked me if you really can go for a night snorkel with manta rays. The answer is 100% yes you can!

I’ve actually done it myself, and it was magical. Magical enough that I knew it had to be included in Hawaiian Heartbreak, and I made sure it was involved right from the first outline.

So, to satisfy curious minds, I’ve found a video of it. There’s a little bit of advertising because I just found it on Youtube, but it’s also a great video, promise!

Did I just add something new to your bucket list?

Now that the Hawaiian Heartbreak roller coaster is over, what next? Well, I may not look like it, but I do have a plan…

Tess obviously had her own drama going on in the last book. If you go back further, you’ll actually see she had her own background issues happening right from the very beginning.

I always knew problems in her life would end up causing a rift with Kayla. But when it came to that last book, I ran into a problem. I just couldn’t do her story justice and keep it to a similar length as the other two books.

So I’ve been busily beavering away at a story just for her, and now I can finally say I’ve finished the first draft! It’s a full length, standalone book, all about Tess. Although of course there are lots of Hawaiian Heartbreak nods for those of us who’ve been here since the beginning.

I hope you’re as excited about the Tess news as I am. Now to start the first round of editing… Eep.

Come be sociable with me!

It may be April 1st, but I promise I’m not fooling! I’ve teamed up with some fellow indie authors, and we’re offering 65 books for free, or 99 cents.

It’s all different genres, so of course romance, but also sci-fi, horror, etc. Jump over to events.supportindieauthors.com to check them out.